Mar and Kumar teach alongside Itzhak in Auroville.
Learn more about them.

Mar was born in 1985 in Canary Islands, Spain. She was brought up in a family that incorporated Yoga and spirituality in their daily life. At the age of 13, she moved with her family to Auroville, an international township, where she studied arts.

In 2010 she went through a severe illness, where she gained interest in self-healing through Yoga.

Her first Yoga retreat was Sivananda Yoga Centre in Kerala in 2011. In 2012 after her first Thai massage course in the Lahu village (Thailand) with Itzhak Helman, she took a course with Krishna Takkis, then tried Ayurvedic Massage and attended a Yoga TTC “QIYO” in Auroville with included Chi Kung, Thai Chi, energy healing and Vinyasa yoga. She has also attended many Chi kung workshops with Hang Wang. After exploring a variety of different massage techniques, she found her calling to Thai massage. Ever since she has attended all the Thai massage workshops happening in Auroville.

Meanwhile, transitioning from a student of Itzhak to being his assistant, she also gave massages in a few holistic centers in Auroville.

In February 2018, she went to the Thai massage circus in Laos, where she explored in greater depth the practice of Thai yoga massage, Yoga and Chi Kung. In June she went to Chiang Mai to Pitched and learned a few lessons from him. That same year, she did Karma Yoga in Barcelona Yoga Conference, workshops with David Lutt, Krishna Takkis and Arno L’Hermitte. She now gives massage therapies and teaches alongside Itzhak and Kumar in Auroville, India. 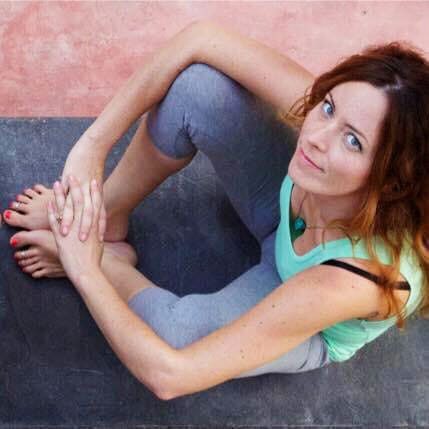 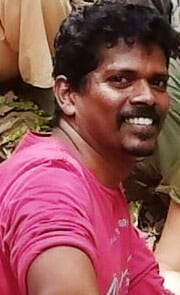 Kumar ( Sivacoumar ) was born in 1974 in Pondicherry, India. He is currently living in Auroville.

He is very happy to direct this beautiful place because this is where he found his interest in bodywork for alternative medicine. In this, he feels very connected with People.

He met Itzhak in Pitanga where Itzhak gave Thai yoga massage courses and treatments. Kumar went to one of Itzhak’s treatment and got interested to study with him. In 2015 Kumar took one of his courses and he started studying further with him and participating in a large number of courses as a student. Then he becomes Itzhak’s assistant in  Thailand and Auroville. Further on he learned Ayurvedic Marmas Massage, Watsu / OBA and ATB (Awareness Through the Body) in Auroville.

Since 2017 he went around Europe to give treatments of Thai Yoga massage and Ayurvedic massage (France, Switzerland, Germany, Luxembourg, Hungary)

Deeply respected for his spiritual life, studies and teachings, we wish his light will forever stay with us. Through each massage we give, every student we teach, we will always be thankful for what he simply allowed us to discover and share, everyday.